Kobe is the origin of golf in Japan.

Kobe’s first golf course was created in 1901 on the summit of Mt. Rokko. An Englishman, Arthur Groom, made a four-hole course near his villa on Mt. Rokko to enjoy playing with his friends, and this is said to be the origin of golf in Japan.

Japan’s first golf club, the Kobe Golf Club, was formed in 1903. Because this club’s course was closed in the winter, a six-hole course was created in what is now Yokoya, Uozaki-cho, Higashinada-ku, Kobe. This was called the Yokoya Golf Association, and was Japan’s second golf club. A boy named Kakuji Fukui who worked as a caddy there went on to become the first Japanese pro golfer. Kobe and Hyogo are thus the birthplace of both golf in Japan, and the nation’s first pro golfer.

Kobe offers great convenience to tourists because it is near Kansai International Airport (KIX). KIX is just 35 minutes away from Kobe by Bay Shuttle ferry, 70 minutes by Limousine Bus. From Tokyo, it takes 1 hours 10 minutes by flight or 2 hours 45 minutes by Bullet train.

Kobe City and Hyogo Prefecture contain many and varied golf courses within an hour from the Kobe city center, and these golf courses are some of the most accessible from urban areas in all of Japan.

Today the region is home to some of the nation’s top golf clubs, and many venerable clubs that are internationally renowned. And the town of Ichikawa, located in the central area of the prefecture, is known as the place where golf clubs (as in sporting equipment) were first manufactured in Japan.

The industry is still thriving today, and clubs are not only sold domestically but also exported overseas, where they are highly acclaimed. The love of golf is deep-rooted in Kobe and Hyogo, and the region is full of abundant nature and tourist attractions with cultural and historic significance. When you visit Kobe and Hyogo to play golf, you’re sure to enjoy seeing its many sights as well.

Kobe and Hyogo have been known since ancient times as a treasure trove of delicious foods. There is the world-famous Kobe Beef; Japan’s number-one sake brewing area Nada-Gogo, producing sake that is widely loved around the world; fresh seafood from local waters prized for its firm flesh, and more.

Kobe and Hyogo are also top tourist destinations, home to the World Heritage site Himeji Castle, Japan’s oldest onsen (natural hot spring bath) resort Arima Onsen, and Mt. Rokko and Mt. Maya, from which you can gaze at the “10 million dollar night view” of Kobe. We look forward to welcoming you for what is sure to be an unforgettable stay in Kobe and Hyogo. 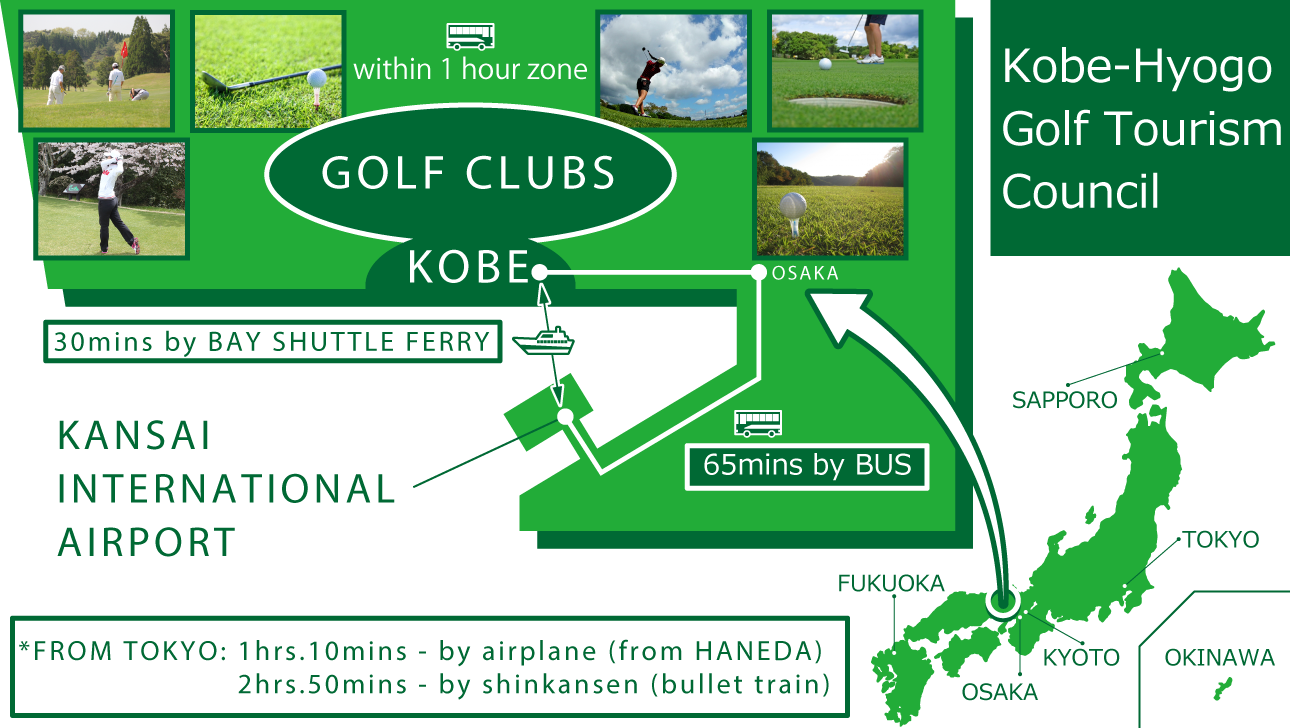